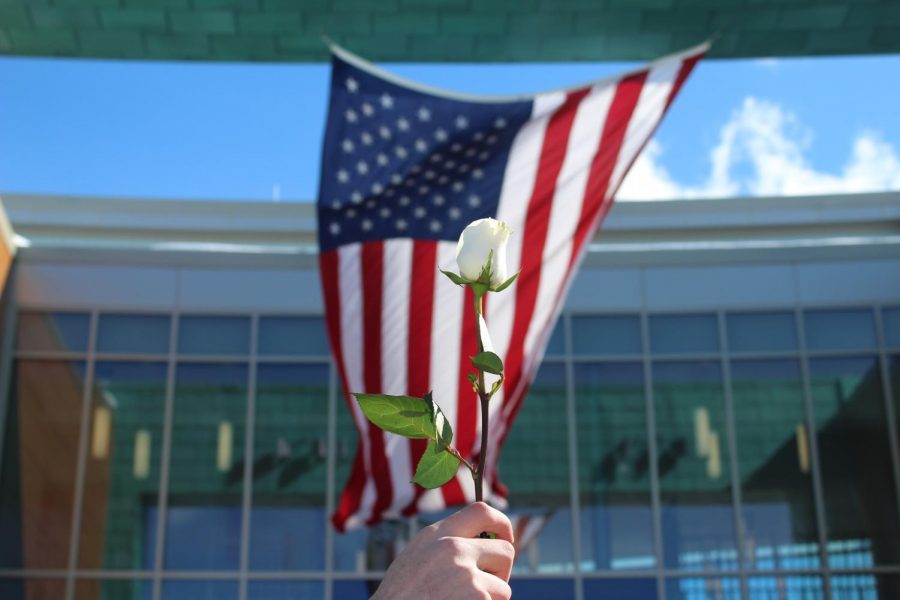 A rose to honor victims of the shooting in Parkland, Florida

Holbrook Middle-High School students walked out of their classes for seventeen minutes in solidarity with young people all across the country. Students had planned to walk out of their classes on March 14, but the erratic March weather forced Holbrook schools to remain closed on Wednesday. The event was not cancelled, but rescheduled, and took place on Thursday March 15, at 10 a.m.

The students were exercising their right to protest, to speak out about something they believe in, primarily focused on remembering those lives lost in Parkland, but also to express a need for changes in society to make schools safer. During the walkout, Katarina Wilmoth spoke passionately to the crowd. She said, “I know that we’re out here standing in the cold and it’s hard, but there were kids running for their lives who didn’t know if they would make it home to their families.”

Additionally, seventeen roses were placed on a table, marked with the names of those who were killed during the attack. Students also signed a banner to show their support for Stoneham Douglas survivors.

Of course, this is not just a local story. Nearly 3,000 student groups organized their own walkout events nationwide. With so many young people making a statement, it’s hard not to pay attention.

Amanda West, a junior at HMHS, says that the protest was not just important, but essential. She participated in order to “support people who have gone through similar situations and show adults that students have a voice that cannot be silenced.” For many, the walkouts are meant to protest gun violence, but they are also an opportunity for youth to let their voices be heard.

Some Holbrook students, however, felt that their voices were not fully heard. They believe that, because of the school’s involvement, the protests had lost their meaning. On February 24th, Superintendent Julie Hamilton sent home letters stating that students would be allowed to protest, with some limitations. Since then, Mrs. Hamilton has met with members of the student body to discuss the kinds of arrangements that need to be made.

Initially, students were told that they were to remain in the building, though after student feedback students were also given the option to exit the building to the courtyard, with a banner available for writing messages of support. Holbrook police officers were also stationed around the protest and blocked off access to the school during the event to keep students safe.

Caitlyn Mann, a junior at HMHS, feels that the school should never have been involved. She says, “[the administration] giving us permission kind of defeats the purpose.” These student express that one purpose of the walkout is to break the rules as an act of civil disobedience.

There are students, however, that do not share this belief. Marley Levy, a sophomore in Holbrook, was one of the students who worked on the event with Superintendent Hamilton. She says, “I feel that the school is being really [supportive] and I was excited that we were getting to make the walkout more how we’d envisioned it than in the initial letter sent home.”

Mrs. Hamilton says that “[the school’s] motive was not to ‘control’ the situation, but to find ways in which all students who wished to participate in a peaceful protest would be able to do this.” She describes herself as “Mama Bulldog,” saying that the most important thing to her is that the students are safe.