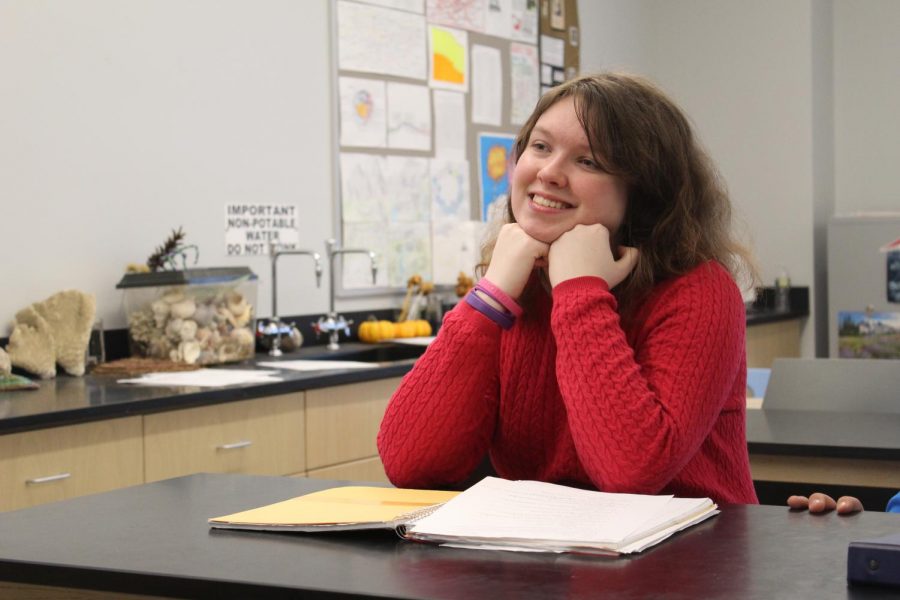 Veronica Chapel has worn purple Converse sneakers every day since the beginning of ninth grade. Of course, this is not the most interesting aspect of her school career. In middle school, she became involved with extracurriculars such as newspaper, video production, and the gender-sexuality alliance (GSA). Since then, she has joined many other activities, including theater and mock trial. She has also taken on leadership positions. Last year, she was the co-president of GSA and she is also a member of the student council.

For Veronica, Holbrook has always been home. “I love this school and everyone in it,” she says, “I bet you could go up to anyone here and find something that makes them unique and interesting.”

By far, Veronica’s longest commitment has been with Girl Scouts, which she has been a member of for eleven years. Currently at the rank of ambassador, she has earned four Lake Swim awards and four Golden Arrow awards. The Golden Arrow awards mark her accomplishments in archery, each earned for hitting the bullseye. Veronica has been practicing archery since she was eight years old and says that one of the awards was earned while shooting at night.

This year, Veronica will be playing the Wicked Witch of the West in the school’s production of The Wizard of Oz. She has only been involved in one other production, as Mrs. Brill in Mary Poppins. Veronica hopes to pursue voice acting but says that Holbrook Community Access Media, HCAM is what’s really preparing her for that career path. “It’s almost gotten rid of my stage fright entirely,” she says.

When asked why she wants to specifically go into voice acting, she said, “You know when you watch something and you’re like ‘Hey, I know that voice!’? I want to be that voice.”

While most of her peers are preparing for college, Veronica plans to take a year off. She wants to try her hand at stand up comedy before diving into more school work. “Absolutely nothing makes me happier than making people laugh,” she says, “Knowing that you’re the reason someone laughs so hard popcorn that comes out of their nose is pretty freaking awesome.”

For the underclassmen, Veronica has two main pieces of advice. The first is to get to know your classmates. She says, “There are some people here that I’ve seen since the fourth grade, and I never took the time to talk to them. It’s only now I’m finding out that they’re pretty cool people.”

The second? “Do your best, but don’t push yourself too hard. You want to still enjoy yourself while you’re a kid. Succeeding is awesome, don’t disregard your mental health in the process.”